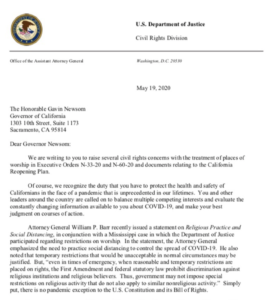 Click/tap to read the letter sent by the Department of Justice to Gov. Gavin Newsom.

The U.S. Department of Justice has informed California Gov. Gavin Newsom that his state’s COVID-19 phased recovery plan may violated constitutional protections because it groups churches and other places of worship in a later phase compared to sit-down restaurants, shopping malls and other businesses.

In the letter, a copy of which is available here, DOJ attorneys acknowledged Newsom’s need to protect the health, safety and welfare of California residents, but said the “California Reopening Plan” may infringe on certain religious freedoms.

The letter paraphrases an earlier statement issued by U.S. Attorney General William Barr in which he wrote that “government may not impose special restrictions on religious activity that do not also apply to similar non-religious activity.”

“Religious gatherings may not be singled out for unequal treatment compared to other non-religious gatherings that have the same effect on the government’s public health interest absent the most-compelling reasons,” the DOJ’s letter said.

The letter, dated May 19, was signed by Eric Dreiband, the Assistant Attorney General of the Civil Rights Decision. U.S. Attorneys representing each of the four federal districts in California were listed as co-signers. The letter was sent to Newsom via California Attorney General Xavier Becerra on Tuesday.

California has put in place a four-phase system for reopening certain public businesses and other institutions following a state-wide shutdown in mid-March due to the coronavirus pandemic. State officials have given nearly three dozen counties the green light to enter “Phase 2” of the plan, which allows for sit-down restaurants and some retailers to re-open, assuming those businesses adhere to “social distancing” practices.

Barbershops, nail salons and gyms are grouped into “Phase 3” of the plan, as are churches and other places of worship. No county has applied to enter that phase of re-opening as of Wednesday evening.

Reaction to the governor’s plan has been mixed, with some churchgoers telling local news outlets they intend to continue worshipping from a distance.

But others have complained about Newsom’s plan since it was enacted. Several lawsuits have been filed in federal court seeking to overturn the closure, while other lawsuits have asked to reclassify places of worship as “essential services,” a tier of organizations that has been given priority for reopening.

Speaking to CBS13 News, civil litigator Mark Reichel said DOJ attorneys may have a case against state officials if they decide to pursue the issue in court.

Click here to read the full story from CBS13 News