The executive order, signed by Newsom earlier this month, was promoted as a way to curb the spread of viral infections during the state’s emergency crisis over the novel coronavirus COVID-19 while at the same time ensuring registered California voters could still cast a ballot in the upcoming presidential election.

Since then, Republican groups have voiced opposition to the plan, saying it had the potential to increase voter fraud through a system that is already riddled with problems. Now, Republican groups are asking a federal court to declare Newsom’s executive order unlawful.

In a filing made with the federal court on Saturday, the Republican National Committee — joined by the National Republican Congressional Committee and the California Republican Party — said Newsom’s order would “invite fraud, coercion, theft and otherwise illegitimate voting.”

“By ordering that vote-by-mail ballots be automatically sent to every registered voter—including inactive voters, voters with invalid registrations, voters who have moved, voters who have died, and voters who don’t want a ballot—he has created a recipe for disaster,” the groups write.

The groups cited several studies in the lawsuit that purported to demonstrate problems and inaccuracies with voter registration records kept by several states. California was not explicitly mentioned in any of the citations pulled from those groups’ studies.

“Much of the push toward all-mail voting has been driven by litigation initiated by the Democratic Party,” the groups wrote in the court filing. “The Democratic National Committee, state Democratic parties, and several affiliated groups have filed lawsuits across the country to force a hurried transition to no-excuse mail-in voting, eliminate voter-identification requirements, and remove other existing safeguards.” 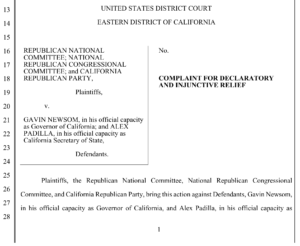 The groups accused Democrat-aligned groups with pushing for vote-by-mail initiatives long before the global spread of the COVID-19 virus because “they believe that the resulting free-for-all will help their electoral prospects.” Since the pandemic started, those groups have pushed harder for vote-by-mail initiatives under the guise of safeguarding public health, the groups contend.

“But COVID-19 does not warrant throwing out longstanding safeguards that protect the integrity of elections,” the lawsuit says. ” In fact, it makes those safeguards more important.”

Alex Padilla, California’s secretary of state, didn’t disagree that the ongoing health crisis required a new approach to voting in California, but said in a Twitter statement on Saturday that the decision to shift to vote-by-mail in the state was “not a partisan issue.”

“It’s a moral imperative to protect voting rights and public safety,” Padilla wrote. “Vote-by-mail has been used safely and effectively in [several] states for years.”

Padilla called this weekend’s lawsuit “another part of Trump’s political smear campaign against voting by mail.” Earlier this month, he said state officials would “do our best” to preserve in-person voting as an alternative to vote-by-mail.

A Department of Justice attorney sent two letters to officials in California warning that elements of their stay-at-home orders may impede on constitutionally-protected freedoms as well as federal law.

The letters were penned by Eric S. Dreiband, an Assistant Attorney General working in the Justice Department’s Civil Rights Division. His latest communication with officials in California came on Friday when Dreiband sent a letter to Los Angeles Mayor Eric Garcetti.

In the letter, Dreiband warned that Garcetti’s comments over an extended coronavirus-related shelter-at-home order could be “unlawful,” noting that the mayor’s plan appeared to be “arbitrary.” 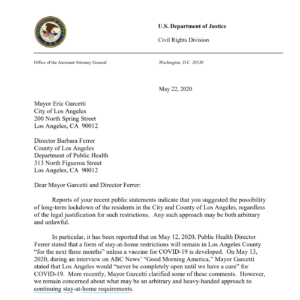 Dreiband’s letter, first reported by the Los Angeles Times, took aim at comments made by Barbara Ferrer, Los Angeles County’s top public health official, on a national morning news program. During the show, Ferrer said Los Angeles County would likely “never be completely open” until a vaccine or cure for the novel coronavirus COVID-19 was available.

Though Garcetti later clarified Ferrer’s comments, Dreiband said the Justice Department was “concerned about what may be an arbitrary and heavy-handed approach to continuing stay-at-home requirements.”

Garcetti has warned Los Angeles may remain partially closed for at least several months. As of Saturday, more than 2,000 deaths have been attributed to the-fast spreading novel coronavirus.

In March, businesses throughout California were closed following a statewide shelter-in-place order issued by Gov. Gavin Newsom. The governor’s plan followed several similar orders issued by a handful of California counties hit hardest by the virus.

Under the order, certain businesses deemed “essential” were allowed to remain open under modified conditions, including a requirement that these businesses employ social distancing practices. Grocery stores continued to operate, as did dine-in restaurants, though the latter was limited to delivery and pick-up orders.

Other non-essential businesses, including nail salons, barbershops and movie theaters were closed. Recreation areas including state parks and lakes were also closed.

For churches and other places of worship, the governor’s shelter-in-place order triggered a divergence from mass gatherings. While some churches offered services online by drive-through, others flaunted the governor’s order, with police intervening in some cases.

Other churches sued, saying the governor’s order infringed on their constitutional freedom to assemble and worship.

In mid-May, Newsom unveiled a four-step plan to reopen businesses and other operations throughout California. The state is currently allowing some counties to operate in the second phase of the plan, which re-opens dine-in restaurants and shopping malls who adopt more-rigorous “social distancing” guidelines.

But Phase 2 does not apply to churches, which continue to be closed throughout the state. Earlier this week, Dreiband sent a letter to Newsom and Xavier Becerra, the state’s attorney general, warning that the state’s categorization of churches as non-essential likely created an illegal double standard.

“Religious gatherings may not be singled out for unequal treatment compared to other non-religious gatherings that have the same effect on the government’s public health interest absent the most-compelling reasons,” Dreiband wrote.

Speaking to CBS13 News, civil litigator Mark Reichel said DOJ attorneys may have a case against state officials if they decide to pursue that issue in court.